Remembering the centennary of the Lusitania sinking

For my come back to blogging I thought I would share a short article on one of my favourite historical episodes of all: the sinking of the RMS Lusitania, which took place on 7 May 1915.

Exactly 100 years ago, the Cunard liner RMS Lusitania departed New York bound for Liverpool. The voyage took place almost a year after the outbreak of World War I, and just over three years after the sinking of the RMS Titanic in the North Atlantic. The Lusitania was not on her maiden voyage: she had been crossing the ocean for almost a decade, and was at one point the largest ship of the world, being surpassed by her sister ship, the Mauretania, and then by the Titanic itself.

The Lusitania was one of the fastest and most luxurious ships of her day. She crossed the Atlantic regularly, transporting both the destitute and the very wealthy between Europe and America. The demand for passenger tickets fell in the autumn and winter of 1914 and 1915, mainly due to the presence of German submarines in British waters. And yet, demand was sufficiently strong to keep the Lusitania in active service, commercial aeroplane travel being non-existent at the time.

On 1 May 1915, amid warnings from the Imperial German embassy in the United States, passengers and crew left New York bound for England. Over 100 Americans were on board. The United States were not yet involved in the war, though the (secret) presence of ammunition stored in the ship’s cargo would certainly seem to prove the USA’s support for the Allied cause.

The Lusitania sailed across the Atlantic without incident, though as it neared the southern coast of Ireland (then a part of the United Kingdom), Captain Turner decided to take special precautions and change the ship’s course in order to avoid being torpedoed by a German submarine. As luck would have it, an enemy U-Boat happened to be nearby, and towards lunchtime on 7 May 1915, targeted the Lusitania.

Despite the ship’s size, existence of water-tight compartments and other safety measures installed after the sinking of the Titanic in 1912, the Lusitania rapidly took on water, and quickly started to list. Many of those on board did not even have time to reach the boat decks and were drowned inside the ship’s enormous hull. Those who did make it to the surface were met by a second difficulty, when lifeboats on the lower side started dangling off the ship’s davits, plunging their occupants out into the water below. Those on the opposite side of the ship were crushed by the very same lifeboats that had been added to the deck for their own well-being. 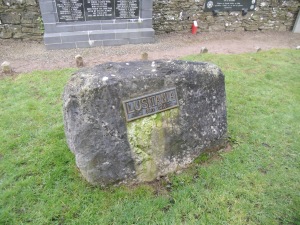 The Lusitania sank in just a quarter of an hour. Those who did not go down with the ship had to swim for safety, if they knew how, or drowned in a matter of minutes. Rescue was at hand when dozens of small fishing boats from nearby villages, including the port of Queenstown (present-day Cobh), reached the site and started pulling survivors out of the water. Many bodies were recovered, but most were lost forever. In all, some 100 American citizens were killed in the incident, and prompted the United States to declare war on Germany in 1917.

Today, most of those bodies that were recovered are buried in Cobh. I visited the area last February, and took pictures of the few marked graves that can be seen. Three mass graves containing 193 bodies can also be seen. The Wikipedia article on the Lusitania reads: “7 May 2015 marks the 100th anniversary of the sinking of Lusitania. To commemorate the occasion, Cunard’s MS Queen Victoria is undertaking a voyage in May 2015 to Cork, Ireland in commemoration of the loss of Lusitania.”

This entry was posted in Genealogy. Bookmark the permalink.