My surname should be Ameglio. And I say should be, because it isn’t. My father was born after my English grandmother’s war-time romance with an Italian-American soldier, Peter Ameglio. As she and my grandfather did not marry, and he never recognised my father as his son, my dad was registered under my grandmother’s legal name shortly after the end of the war (for the full story please visit my page dedicated to my grandfather).

But whatever official records may say, even if not by name, biologically I am certainly an Ameglio. This page is dedicated to the direct paternal line from which I am descended, and to anyone else out there who may be a genetic match or else is also an Ameglio from Piedmont.

The Surname Origins
Ameglio is a relatively rare surname which, for all its scarcity, can be found in practically all regions of Italy. It is most commonly found in north-western Italy, particularly in the regions of Piedmont and its southern neighbour, Liguria. According to online analytic data, most other regions appear to have a significantly lower presence of Ameglios, with the surname being broadly more common in the north than in the south (not to mention the islands of Sardinia and Siciliy, where it is non-existent). This prevalence of Ameglios in Piedmont and Liguria would seem to indicate that the surname originates from, or became from prolific, in the above-mentioned areas. It is hard to say at this stage if all Ameglio families have a common ancestor – an amusing but unlikely theory which only a Y-DNA genetic test between different Ameglio families would be able to confirm. 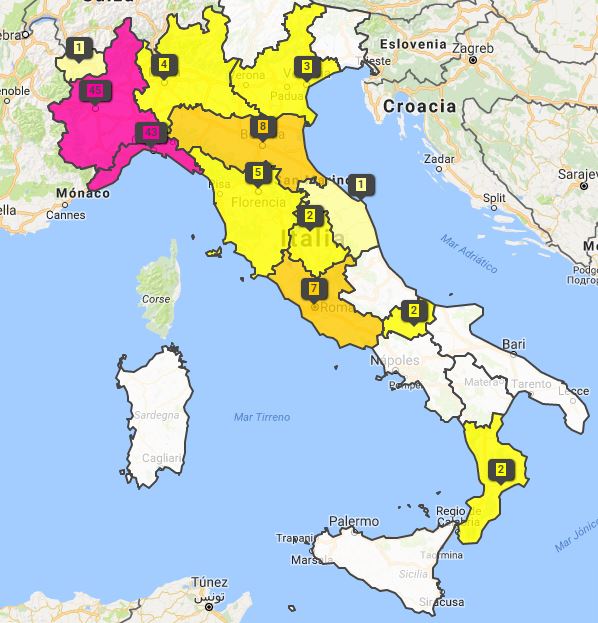 The presence of the Ameglio surname throughout Italy today. Source: Cognomix.

My Direct Line
My most remote ancestor that I have been able to trace on my direct male line was a man called Gerolamo Ameglio, who lived in the latter half of the 1700s in the prosperous market town of Nizza Monferrato (then known as Nizza della Paglia, or “Nice of the Straw”, to distinguish it from the larger and more famous coastal city of Nice). I know almost nothing about Gerolamo’s life, although he was probably of very humble origin. His marriage to Giulia Guasto produced at least two sons, including my great-great-great-great-grandfather Giuseppe Ameglio, who was born in or around 1786. Giuseppe’s life is equally mysterious, although I do know he died in 1840 leaving at two daughters and a son from his marriage to Isabella Merlino, who predeceased him.

Giuseppe and Isabella’s only known son, Gerolamo (1815-1874), was a contadino or agricultural labourer. His marriage to Francesca Giribaldi, who came from the nearby hilltop village of Alice Bel Colle, produced at least five children, of whom at least two had descendants.

Gerolamo would have been in his mid-40s when his youngest son, my great-great-grandfather Vincenzo, was born, and died when Vincenzo was only 15. The latter seems to have settled into married life at a young age, but the marriage ended when his wife died in 1884 while giving him a daughter, Giuseppina (1884-1939). Vincenzo’s second marriage less than two years later was also destined to be short-lived because of the differences in character between him and his second wife, my great-great-grandmother Margherita. By the time she gave birth to their only son, Vincenzo had already moved back to his hometown together with his infant daughter. He died there in 1917.

Vincenzo’s only son, my great-grandfather Giacomo, was born after his parents’ marriage had ended. Brought up single-handedly by his mother, Giacomo would become one of many millions of Italians who emigrated to America at the turn of the century. In 1910 he boarded a ship and settled in New York, where he married my great-grandmother and had my paternal grandfather. He travelled back to Italy on various occasions, married a second time after his first wife died, had a daughter, and died at the age of 74.

Both my grandfather and my great-grandfather each had a half-sister, but as neither had any brothers, the surname Ameglio died out when my grandfather died in 1981. My great-great-grandfather Vincenzo had at least three older brothers called Carlo, Luigi and Giuseppe; the latter settled in the Italian village of Castelletto Molina, and his son Enrico Ameglio, who married to Maria Scovazzo, had at least five children: Maria Giuditta Ameglio (1912-2003), Giuseppe (1914-1998), Stefano (1915-1998), Guido (1917-?) and Luigi (1919-?). I wonder if any of them have living descendants today!

Genetic Haplogroup
In 2017 I took a DNA test with Living DNA. The test confirmed that my Y-DNA haplogroup (the DNA that is passed from father to son) is Haplogroup I2, and within that group, my Y-DNA belongs to the subclade I-L596. The I2 Haplogroup is commonly found nowadays among Eastern European males, and is thought to have arisen some 22,000 years ago. Like the surname Ameglio, this haplogroup is fairly uncommon in mainland Italy, where the Ameglios have lived for the last 300 years. The haplogroup also seems to be prevalent on the island of Sardinia which, we must remember, was ruled together with Piedmont (where the Ameglios came from) as the same country from 1720 until the unification of Italy in the 1860’s. It shouldn’t be surprising, therefore, to find historical as well as genetic ties between the two regions.

This complex history and genetic information beg the question: how did the Ameglios I descend from carry a genetic signature which is more or less unique to Eastern Europe and to Sardinia, where currently (as seen in the first section of this article) there is no recorded presence of Ameglios? I can think of three possible explanations: 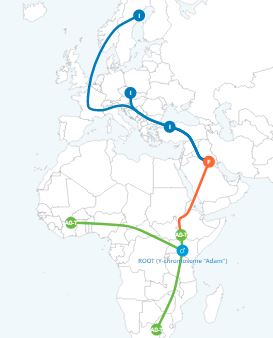 My link to Adam: the genetic path followed by Haplogroup I-2 on its way out of Africa. Source: Living DNA.