When I was little, I used to attend Sunday School every week, while preparing myself for my First Communion and, later, for my Confirmation. It wasn’t what you might call a very spiritual experience, as our lessons were taught by the local church-going spinsters, who knew little more about God and the Trinity than I did about the Panama Canal. I wasn’t particularly devout, even then, but despite my uninspiring beginnings,  I have always felt great respect for the Catholic church -despite its bad PR in recent times. I always knew my family background was mixed, but I never considered that my religious background might be mixed too. 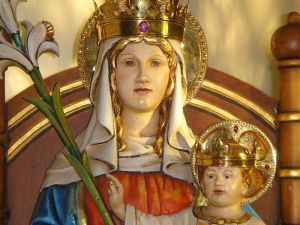 Our Lady of Walsingham, one of the main Catholic shrines in England. (Source: Wikipedia)

When I was about 12 or so, I “discovered” that my paternal grandmother’s family were not Catholic, but Anglican. This is hardly surprising, as they were all as English as bread and butter pudding; after all, England was a country where Catholics have made up for a very small percentage of the population since Henry VIII divorced Katherine of Aragon in 1533.

Since my discovery I have traced my family back many generations, but it wasn’t until a year ago or so that I learnt of a distant relative whose descendants married into the very core of the early Mormon movement in North America.

Lucy Allen was christened in 1774 in the (Anglican) parish church of Saint James the Great in the small English village of Colwall, Herefordshire. Her parents were William and Mary Allen. At the time, there were only a handful of men called William Allen in Colwall who could have been Lucy’s father, and from what I have researched so far, the likeliest candidate would have been my 4x great-grandfather’s elder brother.

Lucy grew up in Colwall and it was there that toward the end of the 18th century she married a man called Henry Turner. They had eight children -two died in infancy- and most of them were born in different parts of Worcestershire, the neighbouring county, very close to Colwall itself. Lucy’s life afterwards seems to have been somewhat uneventful, and she died in 1833, aged 59. Perhaps not coincidentally, four of her children married members of the Stead family, whose origins have been traced back to the early 18th century. As I have found no other Mormons on the Turner/Allen side, I believe the Steads may have been the source of my relatives’ conversion to the Church of Jesus Christ and Latter Day Saints, as the Mormon Church is officially known. 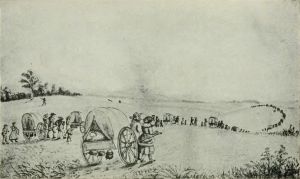 A Mormon handcart train making its way across the American territories. (Source: Wikipedia)

One such union, that of Henry Turner Jr. and Ann Stead, took place in 1835, but at which point the couple converted to Mormonism, I cannot say. I know that by 1857, the couple and their surviving brood, plus Ann’s widowed mother, joined a large group of fellow Mormons in Liverpool. There, they boarded the George Washington, a square-rigged, three-floored vessel which had been chartered by the Mormon Church in America to bring “pilgrims” to the new continent.  The ship set sail at the end of March with over 800 Mormons on board. After a peaceful crossing of 23 days, they reached Boston, and thence they made their way to Iowa City. What extraordinary sensations my relatives must have felt! The new world, a new life amongst a new congregation!

Using handcarts as their only means of transport, the Sixth Company, as this conglomeration of newly arrived immigrants was known, made their way to Florence, Nebraska (present day Omaha, Nebraska), and from there to Salt Lake City, Utah, where they arrived in late September of 1857. 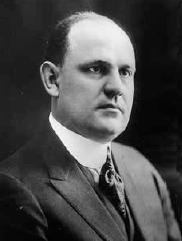 Henry and Ann Turner and their family lived in Salt Lake City for a limited time, as some years later they were already living in Farmington, Utah, where most of them settled permanently. By 1857 the couple’s eldest child, Emma Louise, had already moved to the United States, where she had married a fellow Mormon, Arthur Steyner, who came from the Isle of Guernsey. Tracing their descendants proved particularly interesting.

Their eldest daughter, who was also her mother’s namesake, married Stephen Longstroth Richards, the son of Willard Richards, an early leader in the Latter Day Saint movement who served as Second Counsellor in the First Presidency to church president Brigham Young until his death. Emma Louise Steyner and Stephen Longstroth Richards had a son, also called Stephen Longstroth Richards, who was a prominent leader in the Church and who became a member of the Quorum of the Twelve Apostles of the LDS Church and a First Counselor in the First Presidency. His marriage in the year 1900 to Irene Smith Merrill, a maternal granddaughter of George A. Smith and thus a great-grandniece of Joseph Smith Jr., the founder of the Mormon Church, produced many descendants. 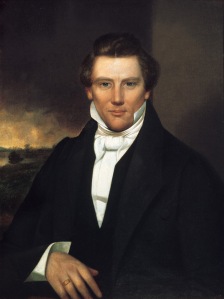 Today, many descendants of the Turner, Steyner, Richards and Smith families live in the USA and abroad, and in many cases still adhere to their Mormon beliefs. I wonder if they know of their ancestors from Colwall, or of their Catholic relatives in Europe?