Coping with the loss of children 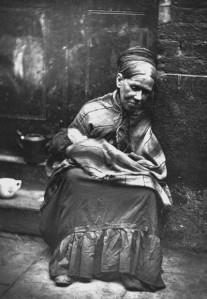 Poverty was partly to blaim for many infant deaths before the 20th century.

There is probably nothing more painful, nor more unnatural, than the death of a child. Fortunately, in the world of today fewer and fewer parents experience such a terrible loss when their children are young , but not many generations ago having to cope with the loss of a child or children was something many parents would be expected to go through.

I don’t have to go very far to find infant deaths. My mother’s maternal grandmother buried three children in her lifetime: a stillborn daughter in the late 1920’s, and shortly thereafter one of her youngest sons died of diphtheria aged only four. The final blow came in 1935 when my great-uncle was travelling in a car with three friends in the Spanish city of Valladolid, when the driver fell asleep and the car skidded off the road and crashed into a tree. My 20 year-old great-uncle was the only casualty.

Several couples related to me on my mother’s side also sustained several untimely losses throughout their married life. One such case is a couple in my family tree who lived in the second half of the 19th century and who had eleven children (four girls and seven boys), of whom at least one girl and four of the boys died in infancy. One of my English great-great-great-grandfathers, Frederick Vickress, sired ten children with his wife over a period of 24 years, but only six of those ten children made it to adulthood. Perhaps the highest level of child deaths endured by a relative of mine was a case which also took place at the turn of the century, when my great-grandmother’s uncle José Pereiro Liboreiro buried six of his seventeen children.

Oddly enough both my father’s maternal grandfather and paternal grandmother each had a twin sister, and in both cases the sister apparently died in infancy. Lucky escape for my great-grandparents (and me I guess!).

Another of my Vickress relatives was specially unfortunate at having healthy children. Although his only daughter from his first marriage lived (only) to the age of 36, his second marriage was even less fortunate. By the time Henry Edward Vickress died in 1875 in Wolverhampton, aged only 45, he had already buried four of his babies; his two remaining daughters lived into adulthood, but one died aged 22 shortly after giving birth to an illegitimate son in Birmingham (the baby boy lived only two days). What became of her remaining sister is still a puzzling question mark. Only 60 years after his birth, by 1891 there seem to have been no descendants of Henry Edward Vickress left alive.

My great-great-great-grandmother Ellen Morris was last recorded in the 1911 Census; she died the following year having survived her late husband for some fifteen years. During their long marriage, which spanned almost two decades, they buried their second son; as a widow, Ellen had to cope with the loss of two more children: one was my great-great-grandfather Samuel (himself having buried his two youngest children), who died in 1909 of diabetes and gangrene aged 58, and his youngest sister Mary Lane, who died of tuberculosis in 1907 aged 40. Even at such an advanced age I can’t begin to imagine how sad it must have been to endure such awful losses for poor old Ellen.

Although I haven’t found anyone in my family tree to beat Queen Anne, who just happens to have buried all of her 17 children, none of whom got passed the age of 12, I would imagine burying one child was bad enough, let alone all the ones my ancestors lost. As the saying goes, “We don’t know we’re born“… Now for a morbid question, what is the record of child deaths in your family?

Passionate about Genealogy. https://elrincondelagenealogia.wordpress.com/ https://thegenealogycorner.wordpress.com/
View all posts by Dawsr →
This entry was posted in Birth, Death, England, Genealogy, Spain. Bookmark the permalink.