Just when you think you know almost everything about your closest relatives, WHAM, you get a brand new person to hook on the family tree, opening up a whole new branch in your ancestral garden… and who knows what else. You can imagine my amazement the day before yesterday when I got a new annual suscription on Ancestry.co.uk and we found someone we had never even heard of before: my grandfather’s half sister, Rita Ameglio. 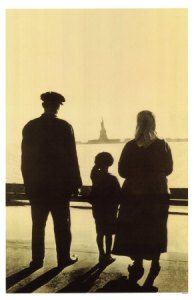 Arriving at the New World.

To be honest, we weren’t even looking for any siblings my grandfather may have had. We just assumed he probably didn’t have any, as his father Giacomo Ameglio (aka Jack) would have been in his 40’s by the time he and his second wife started a new life together. We knew that by 1920 my grandfather’s mother had died, and six years later his father had remarried to a fellow Italian called Francesca Castino. She sailed to New York City two years after, and applied for naturalisation in the United States in the late 1930’s. Looking at the application form it all seemed pretty much old news: the address, the name of her husband, even her date of birth were facts we had already found before through one webpage or another. Suddenly, a new paragraph made it clear: she and Jack did have a daughter, born in 1931, living with the couple in 1938.

There it was, that silent piece of family history waiting to be dug up by us, probably their nearest living relatives in the world. So it appears my great-grandfather had a son from his first marriage six years after settling in the USA, and a daughter with his second wife about three years after she moved to America. Sadly, that’s all the news we have been able to trace so far. There are no further records on Ancestry about “Great-Aunt Rita“, who would be 80 today (if she’s still alive). I wonder, has she ever wondered if she has any living relatives abroad? Does she know her older half-brother had a child in Europe? Would she, do you suppose, have any photos of her late brother, my grandfather? Does she hold the key to so many mysteries which have plagued my dad’s life for so long?

If by any chance you are, know or knew Rita Ameglio, born in May 1931 in New York City, daughter of Jack Ameglio and his second wife Francesca (Castino), who lived at 412 W39th Street, Manhattan, or have any further information about her older brother Peter Ameglio (1916-1981), please get in touch by leaving a message at the end of this post and an e-mail address where I can get back to you. Thank you.

This entry was posted in Emigration, Italy, United States. Bookmark the permalink.