Two days ago, genealogy came to life. Less than two weeks ago, you’ll remember, I posted about a recent discovery we made, concerning my grandfather’s younger half-sister, Rita. Through a distant English cousin of mine, Anne (related to us through an entirely different line altogether), we managed to get a bit more information about Rita, having been born in the early 1930’s in New York City. Anne’s cousin in America, Michele, who has access to many documents online (I’m not sure whether through Ancestry or some other genealogy webpage) started reporting back many documents, some of which we already had, some of which were news to us: my great-grandfather’s emigration records, his application for US naturalisation and so on. 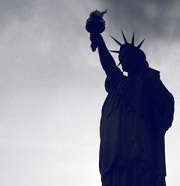 Several times did my ancestors pass in front of the Statue of Liberty when they emigrated to America in the 1910's.

The crack came when I got an e-mail from Anne forwarding a message from Michele, which read “I have found Rita’s married name“. We were getting closer and closer at an incredible speed. Less than two weeks ago I had no idea my grandfather had any brothers or sisters in America, and here we were unearthing names and people out of the blue.

Hours later we got another forwarded e-mail from Michele/Anne saying that Michele had actually rung Rita up and told her about my dad and I, and that we were looking for her, and asked her whether Michele could send us Rita’s phone and address, and she said yes! Well, to cut a long story short, I rang my dad and told him all about it, and surely enough he telephoned Rita once a few hours had gone by (given the time difference, phoning our long lost Aunt for the first time early in the morning would not make us too popular…).

My dad spoke to her for a short while (I wish I had been there to listen on). He said she sounded nice, if slightly weary (well wouldn’t you be?) and that she was all there. He asked her about his dad (her late brother), about whether there were any pictures of him (there aren’t any, apparently), about when his father died (because we couldn’t find his death certificate) and so on. As she doesn’t have an e-mail, she asked my dad if he could write her a letter. My dad asked her how he should address her, and she sweetly replied “Aunty Rita will do”. I suspect it will be a long, revealing and heart-felt letter.

Who knows, maybe by this time next year we will have gone to New York and visited our newly discovered Aunty Rita? Anyway, what an unexpected Christmas present this has been.