Well, here I am, safe and sound, back in the real world for a change, and what a genealogical experience Italy has been!

This was of course the second time my father and I ventured forth  and north in search of our long forgotten (and unknown) Italian ancestors. Actually, whenever we prepare a trip of this sort, my dad always likes to nag me about how totally unrelated to genealogical research our trip will actually be. Naturally, I usually win the argument by taking him day in and day out to cemeteries, archives and registry offices. And thank God, or else we would have never found out what I am about to tell you.

We decided to stay at a three-star hotel in a small hill-top village called Alice Bel Colle, near the border between the provinces of Asti and Alessandria, in Piedmont, northern Italy. The place was rather more picturesque than quaint, and it lacked the resources of several modern conveniences like 24-h broadband connection, but or glass (OK, glasses) of whiskey and gin&tonic every night after dinner made our stay much more bearable.

On our first full day there we went, as arranged, to the municipio (town hall) of San Marzano Oliveto, the small village where my great-grandmother Giovanna had been born in 1895 and where she lived until the age of 17 it was then, at the end of 1912, that she decided to cross the Atlantic and start a new life  in New York. Three years later she married, and a year after that she had a baby son, my grandfather. Sadly, she died four years after that, aged 24, leaving my great-grandfather a young widower with an infant son to take care of.

The lady at the municipio was very interested in what we had to say about our family history, and proved to be immensely helpful. With my poor knowledge of the Italian language and a few smiles we were able to convince her to allow us to search for Giovanna’s birth certificate. As we knew the exact date, it did not take long to find her. We were also quite pleased to confirm that she had a twin sister (who was actually ten minutes older than her) and the document also allowed us to confirm the name of their parents and two grandfathers (grandmothers, for some reason, were not mentioned in either entry). Next we wanted to confirm whether an immigrant from the same part of Italy, with Giovanna’s surname and who emigrated to New York some years before she did was indeed her older brother. And indeed, we were right! In front of us was the birth certificate of brother Giacomo, my great-granny’s older brother, who in 1909 left Piedmont and decided to start afresh in America, only to vanish after the 1910 Federal Census was taken.

Noticing our interest, the lady at the town hall told us that the surname we were looking for was not very common in the village, but that there was a lady still alive who did have the same surname, and that we might try to contact her. After all, she only lived down the road!

At this stage I want to comment on a point we genealogists tend to forget. Indeed, our fascination for family history may not only lead us to uncovering our dead ancestors, but may also make us end up tracking down living cousins. However, many people are not as keen as we are, and may feel rather uncomfortable when strangers (even though closely related) turn up out of the blue. With that thought in mind, we decided not to pursue that course, and instead drove down to the cemetery, where we felt we would cause less havoc.

The tomb of my great-great-grandmother in San Marzano.

It was at our next port of call that we got the first of many hits during our stay. Buried side by side in the same family vault were the tombs of my great-great-grandfather Pietro and great-great-grandmother Amalia. Not only that, but each plot included a small cameo-shaped photo-portrait of each one! Crammed against the locked vault’s glass doors, my dad and I tried to get as close as possible to the photos in order to see what our ancestors looked like, and what my mysterious great-grandmother may have looked like… had she lived longer.

The inscription on the vault also gave us new clues: it stated their year of birth and death, 1859/1941 for one, 1869/1956 for the other. With that we realised that Pietro’s birth would only have been recorded in church records, his birth having taken place before Italian unification and the introduction of compulsory civil registration. However, his death would certainly have been recorded in the civil registry we had just visited, as indeed it was. Having died during the time of Fascist rule in Italy, Pietro’s entry in the death records included his race (“Aryan”). More importantly, the informant was a man called Armando, who was listed as the deceased’s son. Another son! The lady at the archive confirmed that the woman living down the road was positively Armando’s daughter, and that we should definitely look her up. Thus we drove down passed the cemetery again, and made our way to the house of our newly-found relative, Pierina (incidentally, we passed the war memorial to those who died in both World Wars; one of the names mentioned matched the information we had of Giovanna’s older brother – could this be the same Giacomo who had gone to America in 1909? Trying to find information about Italian soldiers who died in WWI is surely my next genealogical quest.) We didn’t manage to meet Pierina, our distant cousin (actually my grandfather’s first cousin) on that day, since she was out shopping and wouldn’t be back till later that afternoon, but when we rang later that evening she agreed, not without reserve, to receive us the next day. Thus we drove back to the house once again the following day and were greeted by this cousin whom we had never heard of (and vice versa). After explaining exactly how we were all related (which was somewhat confusing because I still hadn’t got everything straight in my head) we started looking at family photos. What a collection she had! Most of the snapshots were undated and unidentified so not even she knew who most of the sepia-coloured people were. But there was one particular photo which stood out among the rest: it was hanging on my cousin’s living-room wall, framed in a somewhat exaggeratedly ornate, faux-golden frame. It pictured a young woman looking steadily at the camera, and a man with a moustache, looking much more confident, standing next to her. The identity of the young woman was unknown to me, but the man was unmistakeably my great-grandfather Jack, whom I had seen in photos taken some 30 years after this particular portrait was taken. Could the young lady by his side be none other than my grandfather’s mother, the sweet Giovanna who had emigrated to America and died at only 24? A remark by my newly-discovered relative held the key to the mystery: “these are some relatives who emigrated to America, but I don’t know who they are” she said. I n my nervousness, I explained their identity, and we all gazed in amazement, my father being particularly touched at the first sight he has ever had of his own grandmother.

The rest of the visit passed smoothly and we even managed to leave with four pictures of Giovanna and her family, which our cousin kindly gave us. 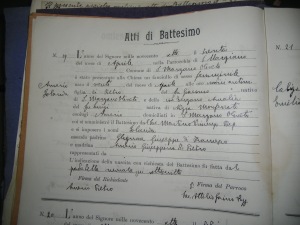 The baptism certificate of my great-grandmother’s youngest sister, who sadly died young like four of her eleven brothers and sisters.

Our next stop was the church archives, where I would be able to find out whether my great-grandmother Giovanna had any more siblings. The church records for that particular part of Italy are located in the bishopric archives in Acqui Terme; the archive itself is a cold, run-down sort of a place, but the staff were very kind and helpful, and even allowed us take pictures or make photocopies of any documents we wanted (for free!).

We successfully found my great-grandmother’s eldest brother, Giacomo, who as we know emigrated to America in 1909. Then came another baby brother, Luigi, born a year later, and of whom I have no further information (therefore I suspect he died early on in life). Then came Luigia, whose plot at the cemetery I had actually seen a few days before; poor Luigia died aged 44 leaving a young daughter aged only 1. Who’s next? Giuseppina, the only other sister I have “always” known about, who stayed in Italy, married and may have had descendants. Enter sister Cesarina “Rina”, whose letters and photos we saw only a few days ago at my cousin’s house. Hang on, what’s this? Rina had a twin brother! But wait a moment… My father and I quickly go over the siblings’ names and birth order: Giacomo, Luigi, Luigia, Giuseppina, now twins Rina and Cesare, plus my great-granny Giovanna and her twin sister Irma… and of course, baby brother Armando who also had a twin! We flick through the pages as carefully as our nerves can stand, and dig up Armando’s twin sister, plus another sister called Irma (so Irma number 1, Giovanna’s twin, must have died young) and a young baby sister called Jolanda., who may also have died young. Wow-wee! That’s twelve brothers and sister, and no less than three sets of twins!!! Go my great-great-grandparents Pietro and Amalia!

The view from the house where my great-grandmother was born, and where she left to start a new life in America exactly 100 years ago.

On our last full day in Italy, we decided to meet up with our cousin Pierina and tell her all about our newly-found relatives. Sadly, being the only child of the youngest brother, she had very sketchy information about her father’s family, but at least we were able to prove our findings and to show her that our visit was sincerely consecrated to digging up long lost relatives, not to disturb the living ones. She asked us if she could have a copy of the photo she had given us a few days before, which we did, and we gave her a plant as a souvenir of our visit. I don’t know if we will ever see her again. I think she wasn’t all that keen on family history, but without her we would never have found out many of the things I have just told you about, let alone seen a picture of my great-grandmother. Now the circle is complete, and my father and I returned home, having survived each other’s company for a whole week, with a terrific sense of peace, historical sense of place, and most importantly, closure.