I am notorious within my family for being a bad cook. Cooking a sad plate of pasta or heating up a frozen pizza is probably as far as I’ll be able to go – unless a particular situation requires a little more effort. It does seem strange, however, that the blood of several good cooks flows through my very veins, starting with my own maternal grandmother, who wrote and published two cookery books in her lifetime, and my great-aunt, who worked as a cook in the same household where my other grandmother worked as a maid. I think there are one or two other cases of cooks in the family tree, but recently I discovered a new cook in my genealogy, whose story I will share with you now. 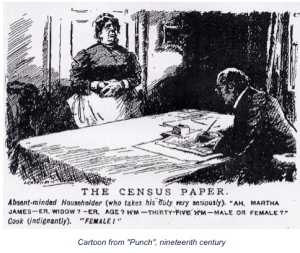 Funny cartoon from "Punch" about the registration of a woman in the census.

For some time I had given up on my Cartwright relatives, on my father’s side. For some reason many of them simply disappear from most census entries after 1841. Many I suppose didn’t even make it to the 1841 survey, but what became of those that did? One such case was Thomas Cartwright, who was born in Kington, Herefordshire, in 1819. In 1851 he is down as an iron miner lodging in someone’s house in Wales but, perhaps more importantly, he is listed as a widower. Aged only 32, Thomas still had a few good years ahead of him, which is why he probably chose to marry in the early 1850’s a woman called Ann (preliminary research has led me to a possible marriage to a Ann Stephens, but this has yet to be verified). By 1861 they had two daughters called Ann and Emma. Emma Cartwright appears on someone’s family tree on Ancestry.co.uk as the wife of a David James and is the proud mother of nine. Her sister Ann, however, is no longer living at home by 1871. Here the mystery started for a few minutes.

I was worried that, like so many other young people of their age, teen-aged Ann Cartwright would have passed away prematurely. Further research in subsequent census surveys revealed that she was certainly not living at home with her parents by the time they were last accounted for, in 1881. A broader search, however, showed there was still some hope that Ann had survived into adulthood, as seems to have been the case.

By 1871 Ann was 16 years old and employed as a domestic servant in the service of an elderly widowed lady called Mrs Ellen Burton, of Nr 2 Barton Villas, Hereford. Ten years later Anne is down as a cook in the house of Henry G. Bull, M.D., who is the head of a family with four daughters. For some reason Ann (by known down on every census as Annie Cartwright) moved from Hereford to Dorset, where she became employed by Revered Oliver Matthew Ridley, a clergyman of the Church of England, who lived at Charminster Hill, Charminster. The household was large, as it comprised the reverend himself, his second wife Frances (his first wife was Louisa Pole Stuart, a grand-daughter of the 3rd Earl of Bute), their three daughters and five servants including Annie. Old Mrs Ridley died eight years later, during the Christmas season of 1900, leaving a bereaved husband and four unmarried children in their mid-to-late thirties. Annie was still at their side when the census was taken a year later, in 1901, signifying that they were obviously pleased with her cooking skills and services.

Old Reverend Ridley died in 1907; his son -from his first marriage- Henry Nicholas Ridley died aged 101 in 1956, after a life dedicated to botanical research (click here to see his obituary). It’s funny to think he would have eaten the food my distant relative prepared for him and his family each day.

As for Annie, I lose all trace of her after 1901. I haven’t found a death certificate yet so perhaps she moved elsewhere, or simply disappeared, as seems to have been the general rule in the Cartwright family.