If a couple of days ago I commented on the grief of parents over the loss of their infant children, I wonder how much worse it would be to receive a letter or a telegram containing the awful news that your son has been killed in action. Probably equally awful.

I suspect, however, that the feeling of sadness might be slightly compensated by the sensation of pride and honour at having a son giving his own life for “King and Country”, or at any rate for defending what he so ardently believed in. Sometimes it is hard to understand why people fight, and why wars take place, but in the real world where fact surpasses sentiment, more often than not men of all ages throughout the history of Humanity have had to make the brave decision of joining the lines, knowing they were risking absolutely everything.

Over the past few years I have tried to gather information about the men (no women killed in action in my family so far, I am glad to say!) who lost their lives as a direct result of a war. This is the earliest case I have found so far:

My grandmother’s second cousin three times removed, Manuel de Ben, was born in Porto do Son (Spain) in 1832. At a very young age he followed an uncle and one of his father’s first cousins to America, settling in the city of New Orleans, Louisiana. There was a fairly large proportion of Spaniards in the vibrant capital of Jazz and Mardi Gras; commerce was an important reason for bringing people from all over the world, especially European immigrants arriving from France, Italy and some parts of Germany. Manuel worked as a clerk in a local store, and lived with his two relatives in what was probably a small house; both his uncle and his cousin worked as gardeners, and (this was the big shocker) actually owned three slaves -two black males and one mulatto boy- who probably lived under the same roof as them. The American Civil War inevitably broke out between the Northern States, who among other factors defended the abolishing of slavery, and the Southern States or Confederates, who were in favour of preserving slavery, given the huge plantations which existed in the South of the United States. Manuel and his younger brother, José Antonio, who had emigrated to America only four years before, both joined the Regiment of Cazadores Españoles, a military body formed essentially of Spaniards, Italians or men of Hispanic origin who wished to defend their beliefs and their adoptive land against those who they felt posed a threat to their modus vivendi.

Difficult as it is to reconcile myself with the fact that someone with my own blood would actually give his own life to defend slavery, I admit in some way I can feel… not exactly admiration for him, but I can comprehend the courage and the conviction that moved Manuel to wage war. I doubt very much that I would have joined the Regiment so readily as he and his brother did, nor do I think would I have had the courage to enlist in any war, now I think about it. But there you go. 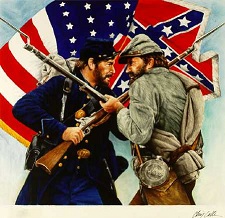 Manuel de Ben was killed on 21st June 1864 at the age of 32 (some sources say he was 34). His death was probably reported to his parents soon afterwards, perhaps through their other son José Antonio, who did survive the war. In fact, in time José Antonio de Ben became a successful cigar and tobacco dealer in New Orleans. He eventually married Inès Marie Fernández, an young American woman from New Orleans whose father was a Spanish émigré as well. Her mother, born Caroline Baldwin, was probably related to Stephen Rumsey, who had been a Lieutenant who had distinguished himself in the War of 1812. Their descendants continue to populate New Orleans and other places in the United States even today. My other American cousins.

1 Response to My slave-owning American cousins