A Tale of Two Sisters

Drusilla and Milborough Vickress were not the only daughters that my great-great-great-great-grandparents William and Elizabeth had in the course of their 41 year-long marriage. However, the bond between the two girls seems to have been close, if one analyses their lives in detail.

Drusilla was born, as her parents’ fifth child, in the year 1817, at a time when it was not uncommon for women, rich and poor, to die in childhood. For instance, that same year, Britain’s Princess Charlotte of Wales died after a long and protracted labour. Drusilla’s mother may well have gone through some difficulties during the birth, and the problems could have left the child physically, perhaps even mentally handicapped.

The little girl joined a nursery already crammed by two brothers and two sisters. The fact that no children were welcomed in the Vickress household for another three years could suggest her mother would not or could not become pregnant as quickly as before. It could also be, of course, that Elizabeth became pregnant after Drusilla’s birth, and either miscarried the child, or lost it shortly after the unrecorded birth.

Whatever the situation, in 1820 young Drusilla was joined by a new sister, whom her parents gave the unusual name of Milborough. She was to be followed by two more girls in quick succession – ultimately, William and Elizabeth Vickress went on to have twelve children.

Drusilla and Milborough grew up together in the family’s home in Hope-under-Dinmore, a rural parish in the English county of Herefordshire. The area is today very much as it would have been two centuries ago, so it easy to imagine the tranquil circumstances in which they spent the first years of their lives. The happiness of their earlier years came to an end when in 1849 their twenty-eight year-old sister Caroline died of unknown causes, followed by their other sister Diana, who succumbed to consumption after years of medical treatment. Only a year after, their beloved father William died of a kidney ailment. 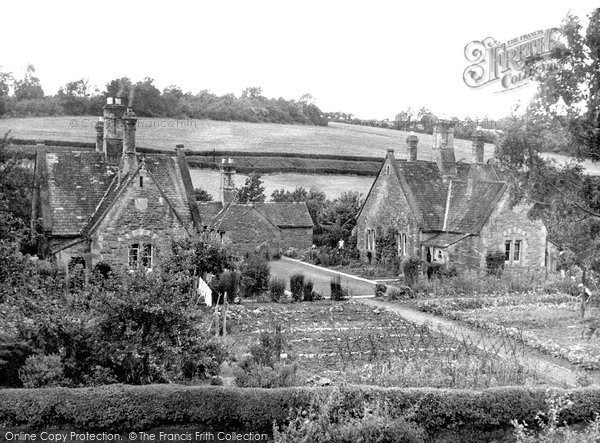 Hope-under-Dinmore, from the Francis Firth collection.

Drusilla and Milborough lived in the company of their widowed mother until the latter’s death in 1875. They worked as dressmakers, a modest but nevertheless respectable profession for women whose only real alternative to earn a living would have been to work the land. Drusilla’s physical problems may well have interfered with her work, however, since in three consecutive census entries (1861, 1871 and 1881) she has no occupation listed other than “at home”.

It is difficult to know why neither sister ever married. It is tempting to suppose that Drusilla’s handicap may have limited her options to find a life partner, but in truth, only two of her sisters ever made it to the altar, and of them, only one married a local boy. It is likelier that potential husbands were in short supply, and the sisters slowly drifted into spinsterhood as the years went by. At any rate, Milborough, devoted from the first to her elder sister, may have wished to nurse Drusilla as long as she could. By 1891 the sisters continued to live, by themselves, next to the vicarage in a cottage called Codling Hall.

In 1894 Milborough died at the age of 74, leaving her elder invalid sister Drusilla to fend for herself. Unable to continue living alone in Hope-under-Dinmore, she was admitted into the Leominster Union Workhouse, where she died aged 84 on 20 January 1901, just two days before the death of Queen Victoria herself. Thus came to an end the life of two quiet, discreet and perhaps otherwise unremarkable sisters who mercifully remained devoted to each other’s care and company until the very end.

Hope-under-Dinmore, from the Francis Firth collection.

1 Response to A Tale of Two Sisters