In recent times family researchers in England, the USA and beyond  have asked me to clarify a matter which concerns their Spanish ancestry. It is, in fact, one of the most common questions I tend to get: how does the Spanish surname system work (and by that, I mean the system which regulates the inheritance of family names from one generation to another)?

Like in most cases in Western Europe, surname usage was introduced in Medieval times to differentiate citizens, mainly for tax purposes. Initially, surnames were not passed on systematically from a parent to his or her children; children often had the choice of which family name they wanted to be known by. In practice, this meant that a couple’s children could easily have different “surnames” and still be, legally and biologically, full siblings.

It was also during the medieval period that some of today’s most common Spanish surnames came into existence, developing from simple patronymic variations of first names. These are easily recognisable by their ending -ez (or the variant -es, which is predominant in Portuguese). This ending denotes “son of” or “of the family of”, and so the surname Fernández means “son of Fernando”, Pérez means “son of Pero/Pedro”, Rodríguez means “son of Rodrigo”, and so on. Most surnames which end in -oz  are usually derived from first names (like Muñoz, which means “son of Munio”); in this last instance, however, we should note that surnames like Galduroz, which also end in -oz, are not derived from first names; Galduroz is a toponymical surname, as it derives from a place name (Galduroz being a town in the Spanish province of Navarre). Nowadays, seven out of ten of the most common surnames in Spain end in -ez! 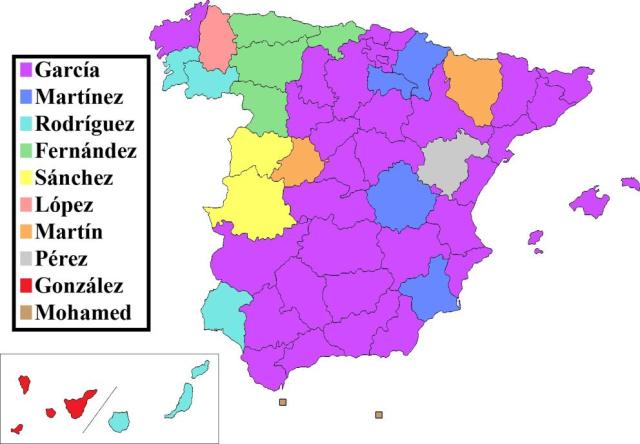 However, the pattern in which a surname was inherited changed over time. Over the centuries, the system became more rigid, and thus left less space for individual choice. In fact, until the late 1700’s it was fairly common for men to use their father’s last name, while women would tended to use their mother’s surname. And so, we may still find cases as recently as the 1790’s where two siblings share both parents but do not make use of the same surname. This custom was discontinued by the 1800’s, although it is likely to come up in any Spanish family tree which stretches roughly seven or eight generations back.

But that is not all. You may have often wondered why Spaniards have such “long” names. This is due, partially, to giving children several Christian names (a tradition which is not as popular today as it was, for instance, one or two generations ago); this tradition often stemmed from the belief that being given several names implied Divine protection on behalf of the saint whose name the child bore – thus, the more names a child had, the larger the chances to lead a longer and healthier life. But going back to surnames, the fact that Spaniards have long names is partly explained by the fact that Spanish tradition allocates not one but two surnames to an individual (historically even to children born in Spain to foreign parents). To understand how this works I have created a simplified (fake) family tree:

As per the above, you can see that Pedro García López, who has two surnames (García and López) marries Catalina Galindo Fernández. Their son, Antonio García Galindo, therefore inherits his father’s first surname and, in the second place, his mother’s first surname. When Antonio marries Sara Rodríguez Pena, their children will have the surname García in first place, and the maternal surname Rodríguez in second place. Antonio’s sister Luisa, on the other hand, married a man called Eduardo Ortega Sánchez. Their children will bear Eduardo’s first surname followed by Luisa’s first surname, thus becoming Ortega García. This means that surnames in the paternal line tend to be perpetuated in future generations, while maternal surnames are usually lost in the next generation. Nowadays this is not necessarily so, as parents can choose the order of their children’s surnames, but the traditional practice of “father’s name first” continues to be the most usual.

After explaining the above, you may have noticed that the tree I created does not show women’s married names; this is because, quite simply, women in Spain never adopt their husband’s surname. In other words, women keep their maiden name throughout their lives.

Curiously, in some countries married women (particularly of  certain generation) used to attach their husband’s surname to their last name to denote that they were married; thus, María Cordero de Arias would seem to indicate that the woman’s husband was called Mr. Arias, and she wished to make the fact known to her interlocutor. This practice, however, is rarely used today and is not officially recognised.

During your Spanish family research, you may well encounter cases where a surname has a de/del/de la between words. It is often asserted that this “mark” denotes an ancestor who was of noble birth, and is therefore out gateway to fame and fortune. Unfortunately (no pun intended), this is very rarely the case. Surnames such as de la Iglesia or del Rey may well indicate illegitimacy somewhere in your family tree, while others like de la Plaza or de Orellana are generally considered to be toponymics, and may therefore be indicative of a place of origin (plaza meaning “square” or “meeting place” and Orellana may refer to any of the places in the Spanish-speaking world with that name).

That said, some surnames have, with the passing of time, become compounds, either by way of a hyphen (such as in Martínez-Bordiú) or by a particle which, in effect, turns two surnames into one fixed form (like García de la Concha). Just be sure, when researching your ancestors’ surnames, that you do not split surnames in the wrong place!

As you can see, there is no black or white when it comes to Spanish surnames. There are many variants, many exceptions and overall a lot of details which the researcher needs to bear in mind to avoid mistakes – but that’s what genealogy is all about, isn’t it?

This entry was posted in Genealogy, Spain. Bookmark the permalink.