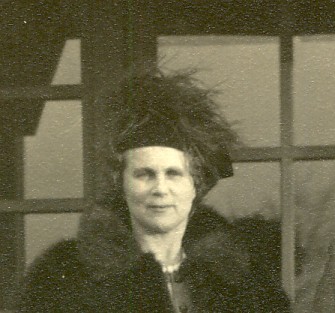 Years ago, probably sometime during the 1950’s, my grandmother’s cousin Marjorie Allen visited Canada and there met up with friends and acquaintances from her native Colwall (Herefordshire) whom she had not seen in decades. The story of her trip, which took her thousands away from home, was capture in the following clipping in the Ledbury Reporter:

A Letter from Canada

To travel thousands of miles from one’s native land and to have the pleasure of running across quite a number of old friends and neighbours who emigrated to Canada years ago was the exciting experience recently of Miss Marjorie Allen, daughter of Mrs. Beatrice Allen, of Greenwood, Jubilee Drive, Upper Colwall.

Mis Allen, who is a teacher, has visited Canada on several occasions, and has taught in a number of schools in that vast country. A member of the “Reporter” staff recently received a letter from her in which she describes her meeting with many old friends and acquaintances who formerly lived in Upper Colwall and The Wyche.

“While staying with cousins in Winnipeg,” she writes, “a ‘Ledbury Reporter‘ arrived containing the article about Mrs. Green’s (Purlieu) 98th birthday. It was most interesting to us, because only the night before I had been the centre of a large family group of old-time Upper Colwallians, doing my best to recall all I ever knew of Upper Colwall and its older inhabitants since the time I was born.

“I was staying with a member of the Dee family, three of whom emigrated to the Winnipeg district when I was a small child. The two young married men, Will and Jim, with their wives and children, followed by their sister, Ada, and her three little girls, took up sections of land north of Winnipeg, and set out to farm their land. Here their families grew up and eventually went to work in the big ‘city.’ One after another went into employment with a large departmental store (Eaton’s) which has branches all over Canada.

“About the time the Dee boys left Upper Colwall there also moved away for Canada Mr. Billy Hill -a friend of my father’s, who was married to the former Mrs. Susan Crouch. The latter was the sister of my aunt by marriage, Mr. Walter Martin.

“I well remember the night they left -‘bonfire night,’ 1906- for three tiny little girls who went to school with me were due to catch a Malvern train at midnight (a weird time to catch a train, to me) with their pre-school-aged brother, Jack and Baby Mamie and their mother, to follow their daddy who had built their first Canadian home. The little girls were Katie, Gertie and Bee – it appalled me to think so many babies were going so far.

“Now I have been visiting Mrs. Billy Hill and all her grow-up married children, and I have been made a tremendous fuss of. Mr. Hill, unfortunately, died in 1945 from a first world war wound. I also visited Mr. Will Dee and his wife, who was Miss Jenny Smith before her marriage. They have a large family of grown-up married children, all doing extremely well, with Canadian homes of their own. You can imagine how interesting it was to me to meet the former Jenny Smith, because my present Upper Colwall home was built on land previously owned by her.”

Miss Allen goes on to describe how large family parties gathered together to hear all the news she could tell them about the inhabitants of Upper Colwall during the time when the late Rev. G. M. Custance was Rector of Colwall. Her friends listed eagerly to what she could tell them of families that had known in the past, and she was the centre of a never-ending stream of inquiry.

Interest was also keen as to what had happened to the local quarries, large houses, and new houses that had been built on old family sites and playgrounds.

“When I return home in August,” writes Miss Allen, “I am likely to be very busy going round Upper Colwall with my camera finding pictures of places and people these news-hungry native of the “Hill” are asking to receive.

“It is interesting to me to learn a few facts of my childhood days which I had never known.

Miss Allen spent an afternoon in Montreal with young Mr. Charles Smith, who worked at Linden Manor, Colwall, three years ago, and who belongs to the Eacock family, who used to lived behind the Royal Well Brewery (West Malvern-road) at the time the Winnipeg colony of Colwall fold left their native land.

This is Miss Allen’s third visit to Canada. “I lost my heart to this wonderful country when I taught in Calgary, Alberta, from 1928-30.” she writes.

“I spent a summer here in 1927 and am now repeating the same trip ere international disputes may prevent me. The bad dollar situation notwithstanding, one can at least get here, if able to arrange an exchange of hospitality with friends.

“Each time I have visited Canada I have tried to do something extra beyond visiting old friends and haunts.”

On her first visit to the Dominion, Miss Allen travelled by road to Vancouver and Victoria, the down the Pacific coast to Los Angeles, and by ship through the Panama Canal to New York, before re-crossing the Atlantic.

The second time she travelled the length of the Mackenzie River, journeying northwards by Hudson’s Bay supply ship (to surposts) as far as the Arctic Coast and the Eskimo settlements.

“But the Rocky Mountains are my Mecca and my never-failing magnet, and soon I will be among them. For a little time I expect to be with the Canadian Alpine Club, and holidaying with the Forest Ranger at Banff, who became a friend of mine when I worked in the Beaver Club during the recent war years. I trust I shall be able to invite you to a private movie show when I get home.

This cousin of my grandmother’s, Marjorie Allen, never married. She died in Colwall, where she is buried, on 26th October 1980, at the age of 83. 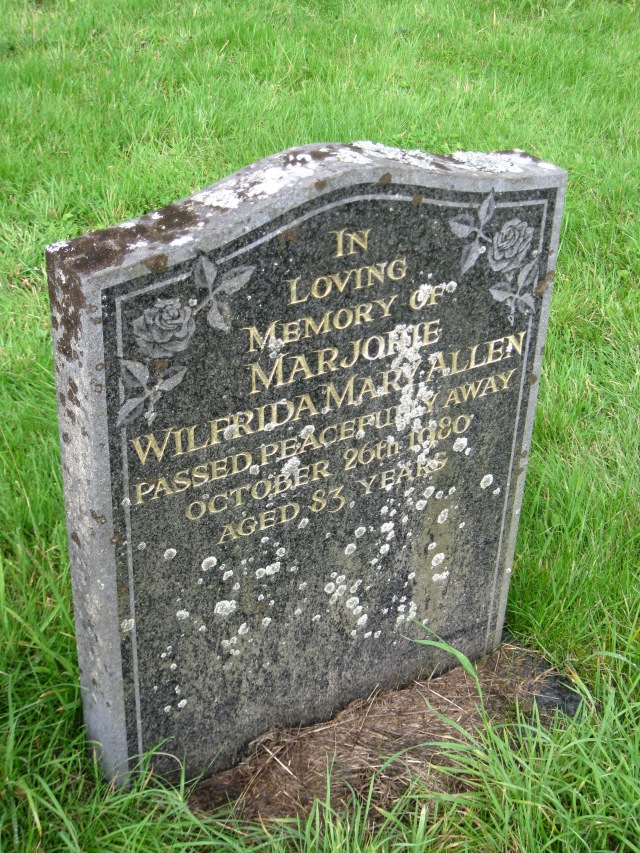 Marjorie Allen’s gravestone stands within the grounds of Colwall churchyard.