Barking up the wrong family tree

Genealogy can be described, at best, as a never-ending learning curve. Your not only make wondrous new discoveries all the time, but you also never stop learning from your own mistakes. Assumptions can sometimes make you bark up the wrong family tree (literally!) and lead you to a dead end. Today was one of those days where I just had to hit my head against a wall for not having been more cautious.

A few years ago I discovered a fantastic page on Rootsweb which stored transcriptions for the church records of the parish of Colwall, where my grandmother’s paternal family came from. It was a goldmine. Decade after decade of baptisms, marriages and burials all nicely rolled up into one tidy little website which some anonymous soul had taken the trouble to transcribe for me. Thank you, whoever you are.

Tracking ancestors on a website is often much more accessible than leafing through a few old volumes of church registers. After all, you just press “Control+F” and type in the surname you’re looking for. Bingo. Allen here, Allen there. It soon became clear that my Allen ancestors had lived in Colwall for well over 200 years. Nice! But beware, you might also be missing out on the marginal notes which somebody forgot to include in the transcription – let alone become the unknowing victim of third parties who have mistakenly mistranscribed your ancestral record! Yes, nothing beats leafing through books I’m afraid.

Piecing together the facts was easy with a little external help from sites such as Ancestry.co.uk and the kind assistance of fellow members of Rootschat. My line could easily be traced back to Thomas Allen and his wife Sarah, who died towards the middle of the 19th century when both were in their eighties. It was beyond them that things started getting a little tricky, as I discovered today to my dismay. 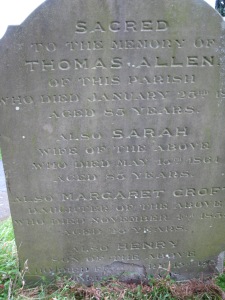 Family plot: The grave of Thomas Allen, his wife and two of their children. (Copyright of The Genealogy Corner)

My findings had led me to believe Thomas Allen was (and, as far as I know, will always be) the son of William Allen and his wife Elizabeth. Now, establishing who this couple were may end up being a little harder to prove that I expected. There is a marriage for a William Allen and a Elizabeth Symonds in Colwall in 1751. The dates ties in nicely with the fact that my ancestor Thomas had an elder brother called Richard who was born a year later; in fact, William and Elizabeth had a further six children, apart from Thomas himself. So… may I therefore assume that William and Elizabeth were indeed Thomas’s parents? Question number 1.

Question number 2. If Elizabeth Symonds was indeed my ancestor, then she may well have been born in Colwall, as it was often the custom for couples to marry in the bride’s place of origin. It seems probable that her parents were Robert Symonds and his wife Elizabeth (talk about choosing exotic names for your children!), but two facts make me uneasy about this assumption: first, the fact that Elizabeth was baptised in 1739 (had she been a baby at the time, this would mean she would have been a girl of merely 12 years when she married my ancestor William Allen in 1751; I know this was before Lord Hardwicke’s Marriage Act of 1754, but still I would not wish to rely on what seems to me a convenient solution for an otherwise seemingly extraordinary marriage). Even more damming to my theory is the fact (and this is a fact) that Robert Symonds, my purported ancestor, made his will a few decades later, a will which I hasten to add was probated in 1780 and which mentions his daughter Elizabeth Symonds (not Elizabeth Allen, as she would have been by then) as one of his heirs; not w whiff or Elizabeth Allen anywhere. No, it seems I have been barking up the wrong tree, and it’s back to where we started with the Symonds family. 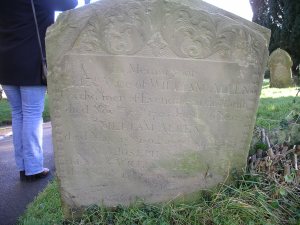 The grave of William Allen and his wife Elizabeth. Their age and date of death offer many clues when tracking down a plausible birth year – and discarding other possibilities! (Copyright of The Genealogy Corner)

Question number 3. So what about the Allen side? Well, fortunately the grave of my ancestor William Allen (and his wife Elizabeth, née Symonds) still exists. It is located in Colwall churchyard and the writing is still fairly legible. It reads that Elizabeth passed away in 1795 aged 76 – thus she was most certainly not the daughter of Robert Symonds who had been born in 1739. Maybe my Elizabeth was Robert’s sister? Food for thought… According to the same headstone, William Allen died in May 1804 aged 81, meaning he would have been born in 1722-1723 (depending on whether he had already turned 81 the year he died, and provided the information on the grave is accurate). The Rootsweb site containing the church transcriptions does not feature baptisms before 1723, but FamilySearch does include two possible candidates: William Allen, bapt. 12 July 1722, son of Richard and Margaret Allen, and William Allen, bapt. 26 May 1720, son of Joseph and Elizabeth.

As I do not have access to the physical books, which are kept at Hereford Records Office (presently closed to the public) and must therefore rely on transcriptions, it’s time to make more assumptions. Assuming that my William Allen, who married Elizabeth Symonds, was born in Colwall; assuming that the headstone in Colwall churchyard is spot on and that William Allen did die having reached the age of 81 in 1804, of these two candidates above the first baby seems to me the likeliest possibility. If William Allen was born shortly before his baptism in July 1722, he would have been very near his 82nd birthday in 1804 when he passed away. For the moment, things tie in nicely. Oh, but look at me, I’m assuming things again. Will I ever learn?

To give this theory even more credibility, or at least slightly more backing, I have managed to track down two wills from the mid-18th century which offer several clues that reinforce the Allen connection to Colwall. In one of them, dated May 1745, John Allen, a yeoman from Evendine (close to Colwall) left his land to his “brother Richard Allen and his wife Margaret”, i.e. my William’s purported parents. I wonder if anyone out there is reading this and can offer me any help proving or disproving this theory? Help!!!

Of course, I am weary of these assumptions, which again have led me to a very convenient spot. Now I find myself scouring the pages of 18th century wills which are pocked with names of relatives I knew nothing about. I don’t suppose the learning curve will ever stop – do you?