The Smith family I am (not) descended from

History can often be ironic with its unexpected and unusual twists and turns. But sometimes we carry those ironies with us for ever. Having been brought up in Spain, I always lived among my peers conspicuously for having an undeniably foreign (that is to say English) surname: Smith. Can there be a more symbolic, alien and typically Anglo-Saxon last name in the non-Anglo-Saxon world than Smith? Don’t get me wrong: I’ve ever felt ashamed of having a foreign-sounding name -quite the contrary-, though in all honesty, I always felt rather uneasy about having a surname that was not quite my own. I’ll explain what I mean.

The whole story of the Smith family starts with an eleven-month old baby called Joseph Smith and his first appearance on the English census in 1851. A glimpse at this document reveals little Joseph was, at the time, the only child born to his parents, Mary and Edward Smith, the latter an agricultural labourer by profession. The Smiths had been living in Thurlby, a hamlet of Bilsby, in Lincolnshire, probably for many generations, and it seems baby Joseph was the first one to break the mold by making the leap north to neighbouring Yorkshire. By 1861, the then ten year-old Joseph and his five younger siblings who had been born in the meantime were living with their widowed mother and widowed maternal grandfather, Thomas Epton, in Bilsby.

By 1871, the year of his marriage, Joseph Smith had moved and begun working as a servant in Alford, Lincolnshire, in the household of Dr Edward Richardson, a veterinary surgeon. Shortly after the census was taken, Joseph married a local Alford girl called Sarah Hornby, with whom he enjoyed their shared conubial bliss and were blessed with the births of numerous children. The difference in age between their children meant that by the time the youngest were born, the eldest were already old enough to become parents themselves. Among the former children we can count Arthur Smith, who was born in the spring of 1891 in Otley, Yorkshire. It was in Otley that young Arthur grew up among modest surroundings, supported by his father’s furniture shop. It is very likely that Arthur’s first professional experience was acquired there, as was that of his elder brother Elias, who by 1901 worked as their father’s assistant.

Life in Yorkshire evidently could not or did not fulfil Arthur’s expectations, and before the decade was out Arthur had decided to emigrate to Canada, as so many other Englishmen of his time did. War was already looming over the horizon in Britain, and Canada being a largely unexploited and virgin nation, Arthur knew life would be better if he left England for good.

Arthur Smith settled in Shellbrook, Saskatchewan, a small town that had been founded in the late 19th century, roughly at the same time Arthur was born. In 1894 the first post office was opened in Shellbrook, and soon many British and Scandinavian immigrants arrived and settled in the area. According to Wikipedia, in 1910, the Canadian Northern Railway reached Shellbrook from Prince Albert for the first time, and the community blossomed as a service centre for the surrounding agricultural region. Arthur Smith worked as an office clerk, a profession he may have learnt at his father’s shop in the North of England, but little more is known of his professional career in Canada. 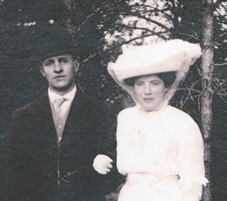 Arthur and Ellen Smith, around the time of their marriage in Canada.

Life seemed what it should be in Canada. Arthur soon met and married a young, pretty English woman called Evelyn Eleanor James, whom everyone called Ellen. The couple probably married in or around 1914, the same year World War I broke out in Europe. Canada entered the war almost as soon as Britain had declared war on Imperial Germany, and 600,000 men and women enlisted as nurses, soldiers and chaplains. Arthur Smith was one of them, as he joined the army in 1916.

Arthur’s wife Ellen gave birth to her first-born James Arthur Smith in 1915; the boy’s two Christian names evidently honouring his father name as well as his mother’s surname. While Arthur was posted at the front, Ellen, who was again pregnant, and her baby boy moved back to her native England to live with relatives in the Herefordshire market town of Ledbury. It was in Ledbury that Ellen learnt of Arthur’s death in late June 1917, just months after the birth of their second son, Donald Hornby Smith. Arthur was killed in action near Mont St Eloi, near Calais. He was just 26 years old. 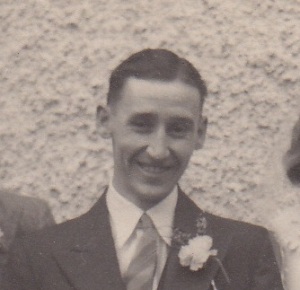 James Arthur Smith on his wedding day. His life would be cut short by consumption less than four years later. His surname, however, would live on.

Back in Ledbury, Ellen raised both her children in her zealous Catholic faith. She chose not to remarry, and died almost five decades later aged 76. James Arthur Smith, Ellen’s firstborn, would have ad no recollection of his father. He went on to work at the Gloster Aircraft Company (GAC) at their factory in Brockworth/Hucclecote, and shortly after the outbreak of WWII, he married my grandmother Betty. The couple rented a house in Brockworth, Gloucestershire, on a newly-built housing estate. They had two children, and life appeared to be typically suburban lower middle class amidst the ongoing war. On one occasion a local rag reported German bombers attacking the factory and fighters shooting up the Shurdington road, while whist drives to raise money for the Red Cross were taking place. Everything seemed idyllic on the surface -James Arthur owned a Morgan tourer car- though it seems theirs was not a happy marriage. Years later, when questioned why she had never remarried, Betty replied “I was married once – never again!”.

In any event, in 1943 James Arthur died of tuberculosis, leaving 25 year-old Betty to bring up her children. As luck would have it, a year later Betty became pregnant by an American GI who soon thereafter made his way it back to America. When his birth was registered, that baby (my father) had to be given my grandmother’s married name, Smith, since that was, after all, her legal name. Thus my father, and by extention my brother and I, ended up with a surname that is, as you can see, not totally ours.

This entry was posted in Genealogy. Bookmark the permalink.