Last October, my dad and I visited the village in northern Italy where my great-grandmother Giovanna Amerio was born in 1895. It was to be not only a quest for missing family information, but also something of a sentimental pilgrimage.

The information we had about Giovanna’s family was initially very sparse: a date of birth, the name of her parents and the fact that she had a twin sister was more or less everything we knew about my great-grandmother’s life before she packed her bags and made her way to New York in 1912.

Our visit to the San Marzano Oliveto registry office, the local cemetery and the diocesan archives in Acqui Terme helped us to build what turned out to be a huge family tree. Not only did we confirm that my great-grandmother’s twin died in infancy (a fact corroborated by the fact that a younger sister was given the same name as her) but we also managed to find the births of twelve children in total.

One of the more surprising facts was that my great-grandmother’s parents, Pietro and Amalia, had three sets of twins. One of these twins was a girl called Maria Cesarina Amerio, but the family called her Rina. Rina Amerio was born in 1894 and was christened a week after she and her twin brother were born. Lack of future references to the brother has led me to believe that he also died young, a fact corroborated by his absence from family portraits, letters and passenger lists. 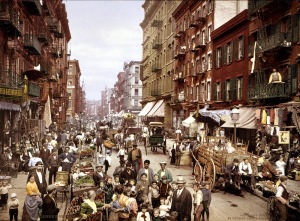 In the spring of 1910, when Rina was but a girl of 16, she decided to emigrate to America, where her elder brother Giacomo Amerio had moved to recently. Another girl called Anna Amerio (possibly a cousin, since her mother was not Rina’s mother Amalia) was also travelling with her. Her younger sister Giovanna (my great-grandmother) followed in her footsteps, and joined her in New York about two years later.

Initially the two sisters probably led similar lives in America. They both got engaged to and married fellow Italian immigrants, and each had a son, but sadly my great-grandmother passed away in 1920, when she was just 24 years old. Rina, on the other hand, led a long life. In 1914, or there abouts, she married Ermano Graziano (he used the English version of his name, Herman Graziano, after he moved to America), who came from Castell’Alfero. The couple kept in touch with their relatives in Italy and for the next few decades wrote short, heart-felt letters back home. I imagine that the advent of War may have affected their fluent correspondence, but I am sure it resumed when peace came back in 1945.

Rina Graziano’s husband Herman died in New York City in 1963; she passed away in late 1977. I know from available records online that their only son, John P. Graziano (1915-2006) married Margherite Pauline Cerrina (known in the family as Rita). She passed away in April 2009 after a long and interesting life. She and her husband were survived by their son Peter “Rocky” Graziano, who I understand lives in the state of Montana, and the latter’s children (Michael and Pauline Graziano) and grandchildren.

If you belong to the Graziano/Amerio family or know anything about them and would like to get in touch with me I would be very interested in hearing from you. Please drop me a message by leaving a few lines and your e-mail address at the bottom of this post, and I will get back to you as soon as possible. Thank you.

2 Responses to Looking for Rina Amerio’s descendants: the Graziano family