The day that Great-granddaddy met the King

Alfonso XIII is received by local dignitaries in La Coruña in 1927. My great-grandfather’s head can be partially seen, third from right. (Source: Foto Blanco)

The other day I walked into one of my favourite bookshops in town: Librería Arenas. As I am writing researching and writing about the history of my grandmother’s family, I was wondering whether there might be a good reference book about life in La Coruña around the time of the Spanish Second Republic (1931-1936), which preceded the Civil War.

As my great-grandfather was a political conservative -he was a staunch supporter of the ousted Spanish monarchy, held zealous religious views (and consequently feared persecution against Catholics in religiously-hostile Republican Spain) and had been politically active prior to 1931-, I wanted to find a book which would tell me about what life would have been like at the time for a man of his position and condition.

Sadly, my quest for such a book was not successful, but on the whole it was a positive and fruitful afternoon. A friend of mine who’d accompanied me to the bookshop pointed out a book about a Royal visit to La Coruña. I leafed through the slim volume without much hope or interest, partly because I soon noticed that the authour had made the fateful mistake of confusing one of the visiting princes (Prince George of the United Kingdom, future Duke of Kent) with his elder brother Albert, Duke of York. Such mistake was understandable, as Albert, Duke of York later became King not as Albert I, but rather as George VI, in the aftermath of the succession crisis of 1936. 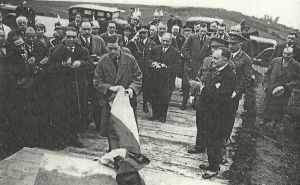 Edward, Prince of Wales, unveils a plaque to the memory of Sir John Moore in La Coruña on 19 January 1931. My great-grandfather stands behind him, on the left. (Photo by express and gracious permission of Mr Manuel Santiago Arenas Roca. Total or partial reproduction, distribution, public communication or modification is prohibited without his express authorization)

But besides poor research on the author’s part, I also noticed a remarkable picture: the Prince of  Wales, who in 1936 became King Edward VIII and was later created Duke of Windsor by his successor, appears in the forefront of the photograph unveiling a plaque to the memory of Sir John Moore, a British lieutenant-general who lost his life in the Battle of Corunna (1809) fighting against Napoleonic forces. Behind him, dressed in what seems to be a long rain-coat, is none other than my own great-grandfather! I needn’t tell you that I purchased the book without hesitating.

An old cutting from a 1990’s calendar had proved that my great-grandfather had already met a Royal personality years before, when in September 1927 he had been part of the reception committee which welcomed Alfonso XIII of Spain and his wife, Victoria Eugenia (born Victoria Eugenia of Battenberg and one of Queen Victoria’s many grandchildren) to La Coruña. Back then, the King and Queen had paid a visit to the city -the King’s third and the Queen’s first- to inspect the improvements of the new railway line which connected La Coruña with Zamora. It was to be their last visit to the city. 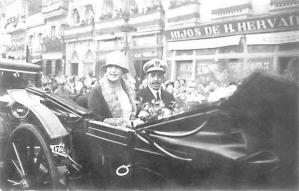 King Alfonso XIII of Spain and his British-born wife, Queen Victoria Eugenia, parade through the streets of La Coruña in 1927. It was their last official visit to the city. (Photo courtesy of La Opinión).

In January 1931, with Alfonso XIII’s monarchy on its last legs and the Second Republic looming over the horizon, the Prince of Wales and his brother, Prince George, visited Spain before embarking on an official trip to South America. They entered Spain by car through the north from France, and made their way to Santander, where they boarded the ship Oropesa, which would take them, not without delay, to La Coruña. There they visited the tomb of Sir John Moore and then unveiled the above-mentioned plaque, which still exists today. However, Edward and George only spent a few hours in the city, for they still had to make their way to Santiago, where they saw the remains of St James the Great, before travelling to the port-city of Vigo, then as now an industrialised hub of the Spanish North. 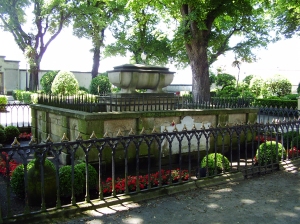 The Princes then made their way to Bermuda, and from there proceeded to South America. The Prince of Wales, it was reported, was so pleased with what he saw of La Coruña that he had promised to return on his way back home the following April. Alas, political developments at the time, with the monarchy recently toppled and the Second Republic still being celebrated by the hysterical masses, it was judged best that the Princes should return to London straight away.

When the picture of the Prince of Wales and my great-grandfather was taken in 1931, one of my great-aunts (who is fortunately still alive) was only three weeks old. Another of my great-aunts was born over a year later, but perhaps more poignant is the fact that my great-grandfather would soon lose his job on account of his political views. It was, after all, a very dangerous time for someone not in tune with the ruling regime.

1 Response to The day that Great-granddaddy met the King